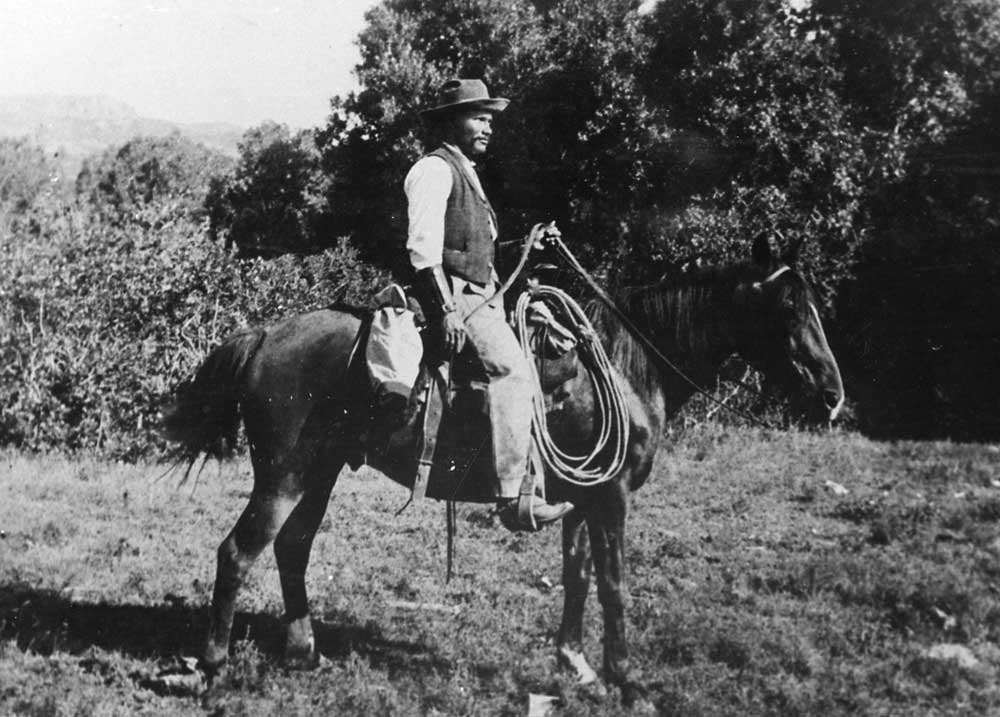 African-American cowboy George McJunkin, foreman of the Crowfoot Ranch and discoverer of the important Folsom Man site that would have such dramatic impact on North American archaeology. This photo was probably taken in 1911, three years after McJunkin’s discovery, and shows him on his horse, "Headless."

McJunkin was a remarkable man. Born in Midway, Texas, in 1851, he survived slavery and the Cilvil War. As a teenager he joined his first cattle drive and began a long career as a cowboy, becoming known for his horse-breaking and roping skills—skills he traded for reading lessons. McJunkin had an insatiable appetite for knowledge, and became an amateur naturalist, building a large collection of books and artifacts.

McJunkin settled in New Mexico in the 1880s, where he worked for various ranchers before eventually becoming the foreman of Crowfoot Ranch near Folsom, New Mexico. It was there, after a devastating flood in 1908 that nearly destroyed the town, that McJunkin made his find. Out riding fences, he discovered unusual bison bones unearthed by the flood waters. The bones would eventually prove to belong to the giant Bison antiquus, extinct for 10,000 years. But it was the discovery of an ancient spear point among the bones that would revolutionize archaeology, and push back estimates of human presence in North America by more than 7,000 years. Unfortunately, McJunkin did not live to see these developments. It was not until 1972 that archaeologist George Agogino of Eastern New Mexico University uncovered George McJunkin’s role in the history of the Folsom site and brought him the recognition he deserved.