1865 Receipt for Sale of Wagon 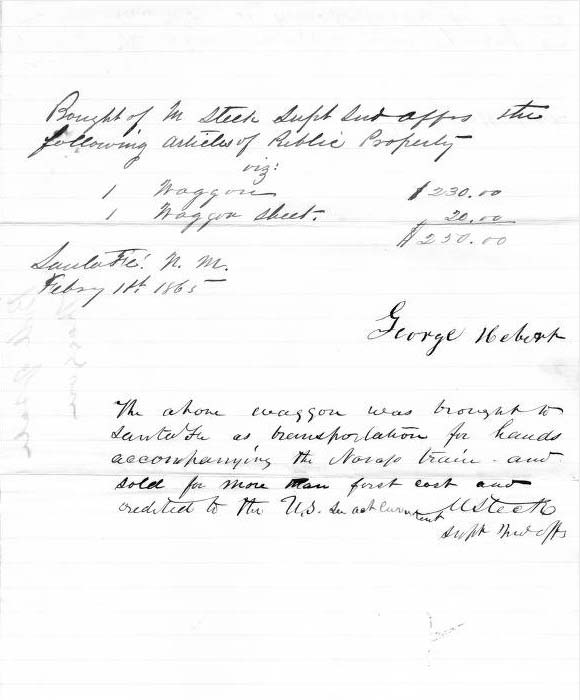 This handwritten note, described only as a "receipt for a wagon," first caught my attention as an interesting tidbit of daily life in the 1860s. But as I investigated I discovered the seemingly innocuous receipt was a relic of a tragic episode in Navajo and U.S. history. The “waggon” in question was sold to George Herbert by Michael Steck, Superintendent of the New Mexico Bureau of Indian Affairs, for $230 (along with a “waggon sheet” for $20) on Feburary 1st, 1865. The note at the bottom states:

The above waggon was brought to Santa Fe as transportation for hands accompanying the Navajo train and sold for more than first cost and credited to the U.S. Su a?t?uvurent

I can’t quite make out that last bit about where the profit was credited to, but there was profit indeed on this second-hand wagon. It’s the description of the wagon’s prior use that connects this piece of paper to a bigger part of history—the euphamistically titled “Navajo train,” better known as The Long Walk.

In 1864, after devastating campaigns initiated by General James Carleton, 9,000 Navajo men, women and children were forced to relocate to Bosque Redondo, over 300 miles away, in a series of tragic marches in February and again in April. Many died as they walked through heavy snow and blizzards, and many more died of starvation, dysentary, and exposure during their internment.

And on one of those marches, this wagon rattled along, “transporting hands.” One year later it was sold off for a profit.

Michael Steck, seller of the wagon, first came to New Mexico in 1849 as a physician with the U.S. Army. In 1852 he was appointed as Indian Agent for the Mescalero Apache by President Fillmore, a position he held until the coming of the American Civil War. In 1863 Steck was appointed Superintendent of Indian Affairs for New Mexico Territory by President Lincoln. Steck vehemently opposed Carleton’s policy of relocating the Navajos, and the support given to the policy by the Office of Indian Affairs.

Frustrated by his inability to stop the campaign and its disastrous results for the Navajo people, he retired in May, 1865, just months after this wagon receipt was written. It was not until 1868, after years of hardship, that the Navajo survivors would be allowed to return to their homeland.